Ok ya’ll. We have to talk about this season of The Bachelorette. Now I’m a pretty inconsistent watcher of The Bachelor/ The Bachelorette franchise. I basically decide if I’m going to watch based on who is cast as the lead. I mean sometimes they just choose big douche bags/ f*ckboys — I’m looking at you Juan Pablo! Or the bachelorette is just uninteresting. However, this season is probably the one I’ve been the most excited for and not only because the lead, Rachel Lindsay, is the

Although, this is important.  The Bachelor began in 2002 and The Bachelorette a year later. Neither show has had a black lead, although one Hispanic man has been the bachelor. Y’all it took 33 seasons –  33 damn seasons!! Interestingly enough, Rachel’s also the oldest (not old though) – she’s only 32. So why is Rachel’s race important?

Black women are often overly sexualized, but not seen as objects of affection or marriage material. There are studies that show black women on online dating sites have the lowest message response rate from men of all races, while being the most likely to reply to men.  To see the beautiful, intelligent, funny, black bachelorette be courted by men of all races vying to be her husband, is such a beautiful reminder for women that look like me that we are desirable and deserve the love we seek.

We’re only two episodes in and while I think you would be thoroughly entertained binge-watching these four hours of greatness, here’s a quick catch-up.  If you plan on watching and don’t want any spoilers here is where you need to stop reading.

The first episode is where we meet all of Rachel’s suitors. Here are a few standouts (and some for not so great reasons): 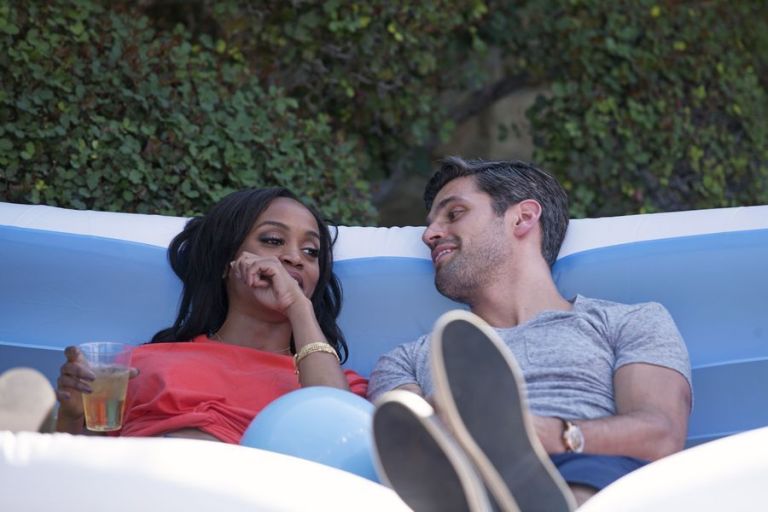 Episode two brings us a group date hosted by Ashton Kutcher and Mila Kunis. Yass celebrity cameos. During this date: Dean gets the group-date rose, and Ashton  refuses to say “Whaboom” when Lucas obnoxiously begs him to.

We’re also treated to a swoon-worthy one-on-one date with Peter. On the tarmac, Rachel throws him a curveball when she says that this date will actually be a two-on-one, because her injured best friend is coming along. AND THEN IT’S HER DOG!!!  They go to Barkfest – literally my dream come true, and later we see them bond over their gaps and talk about how they both went to see therapists. Handclaps for making mental health an important and casual topic. No stigma here.

And then the drama:

During the second group date which saw the guys playing basketball, coached by none other than Hall of Famer Kareem Abdul-Jabbar, we learn that Demario is a snake.  His ex-girlfriend Lexi shows up after the game to tell Rachel that Demario hadn’t even bothered to break up with her before signing on for the show.  Lexi says she saw DeMario on After the Final Rose at the end of Nick’s season, when DeMario was one of the guys who showed up to meet Rachel before her season started. DeMario pretends not to know Lexi at first, which is a mistake, because Lexi has her receipts: text messages between the two of them. He then tries to talk his way out of it, but queen Rachel is an attorney and has none of it:

Demario shows up at the end of the episode before the rose ceremony because his “character was assassinated” and I guess he wants a chance to explain himself.  Whatever!

The Bachelorette airs Mondays at 8 p.m. ET on ABC. If you end up watching tweet me your thoughts!

2 Replies to “The Bachelorette: Let It Be Your Guilty Pleasure”